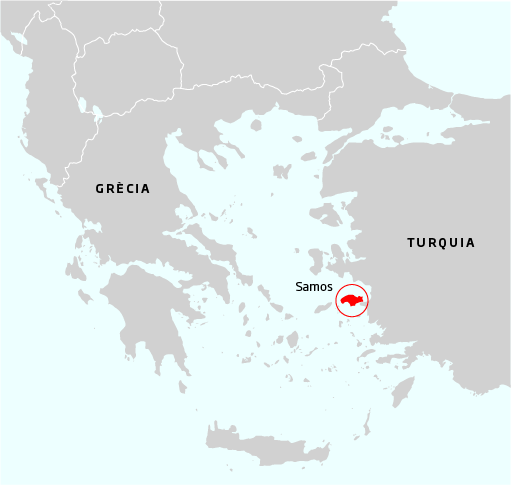 At the top of a mountain in the middle of nowhere, on a remote island, Greece and the EU are building an actual prison for refugees which is in tune with the new model of sealed-off borders. The goal is to bring the men, women and children who arrive from Turkey on dinghies to a place where nobody will see them. Far away from the local population, far away from cameras. They are building the new edifice of “containment” policy far away from it all. Refugee containment camps for fortress Europe on the Aegean islands.

The most advanced facility of this new structure is located on Samos, the Greek island nearest Turkey. Although it was designed to hold 648 people, at present about 4,500 refugees struggle in shanties within and outside the actual reception and identification centre in Vathy, the capital of the island, with a population of 6,500. Tension with local residents is palpable and last year the Greek authorities and the EU began to build a new centre in the Zebrou area, six kilometres from the nearest village. As announced last summer by Greek Immigration Minister Notis Mitarachis while he visited the island, once the centre is operational —by the end of this year— refugees will be allowed to leave the facility during the day, provided they are wearing an electronic identification bracelet. But they will have nowhere to go. At night the centre will remain closed. The European Commission has given the Greek government €130 million to build this and other centres planned for Lesbos, Leros and Chios.

Greece and the EU are building an actual prison for refugees.

A six-metre tall double fence topped with barbed wire surrounds the whole area, about 200 hectares: it is the equivalent of two hundred football pitches for the internment of whole families. A small area will accommodate prefab modules for up to 2,100 people, even though the site is ready to take many more. According to reports in local papers, the facility will include a space for single-parent families, a pre-deportation centre (the 2016 UE deal with Turkey states that migrants who enter Greece illegally will be sent back), medical facilities and even a school. It is scary to see a children’s park with swings and a slide, at one end of the camp, enclosed with fences and barbed wire.

The idea of “closed” centres is part of the new strategy of fortification of Europe’s borders: migrants spend weeks and years waiting on a Greek island for their asylum application to be processed and the problem has become chronic. Several times the number of refugees has exceeded the local population and the situation has deteriorated as their stay on the island stretched for ever in time: what was meant to be a stopover facility has now become a purgatory. At the beginning of the year there were 40,000 refugees on the islands of the Aegean Sea. Now there are still more than 23,000 left, after the government sped up the transfers to mainland Greece in order to cool off tempers. 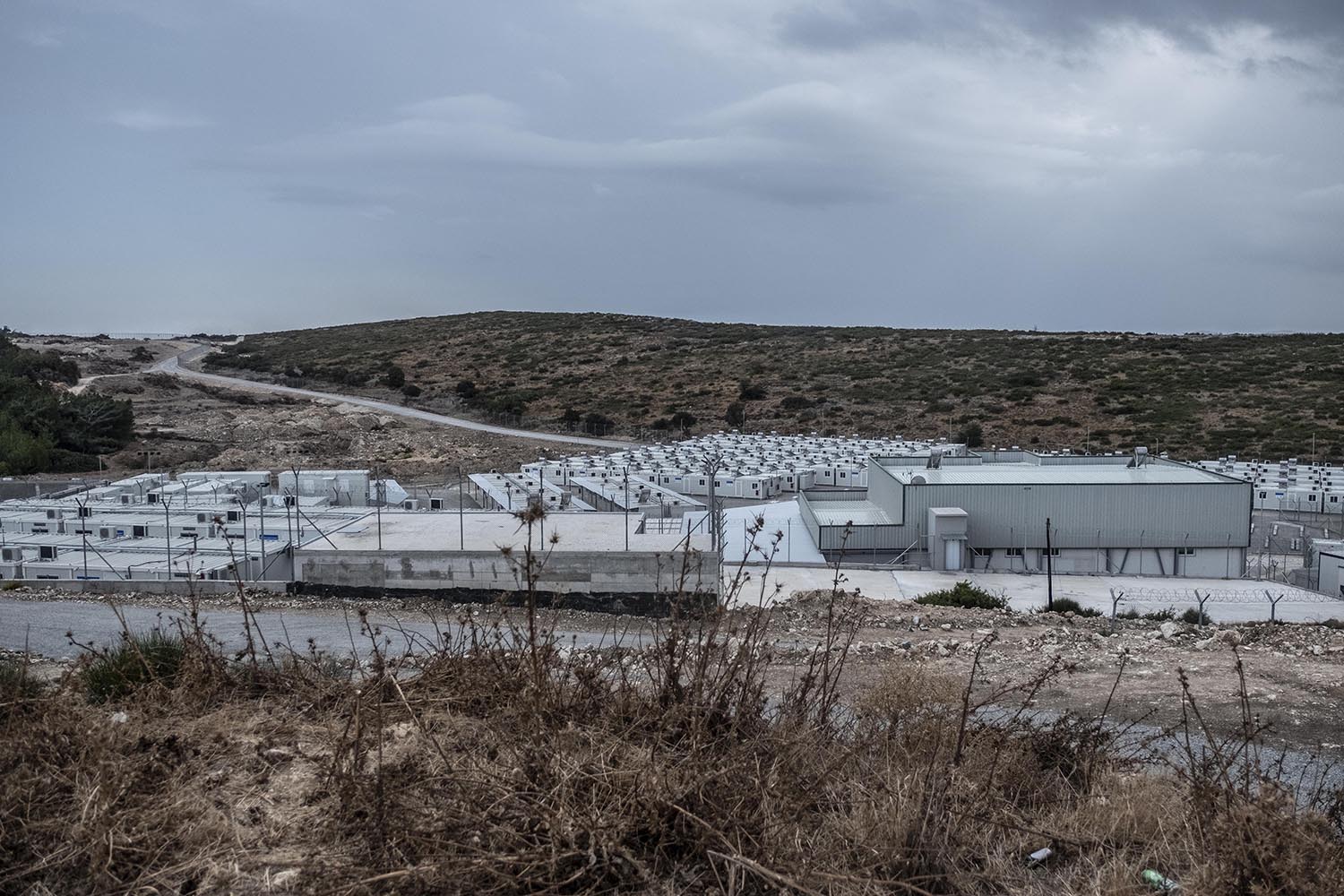 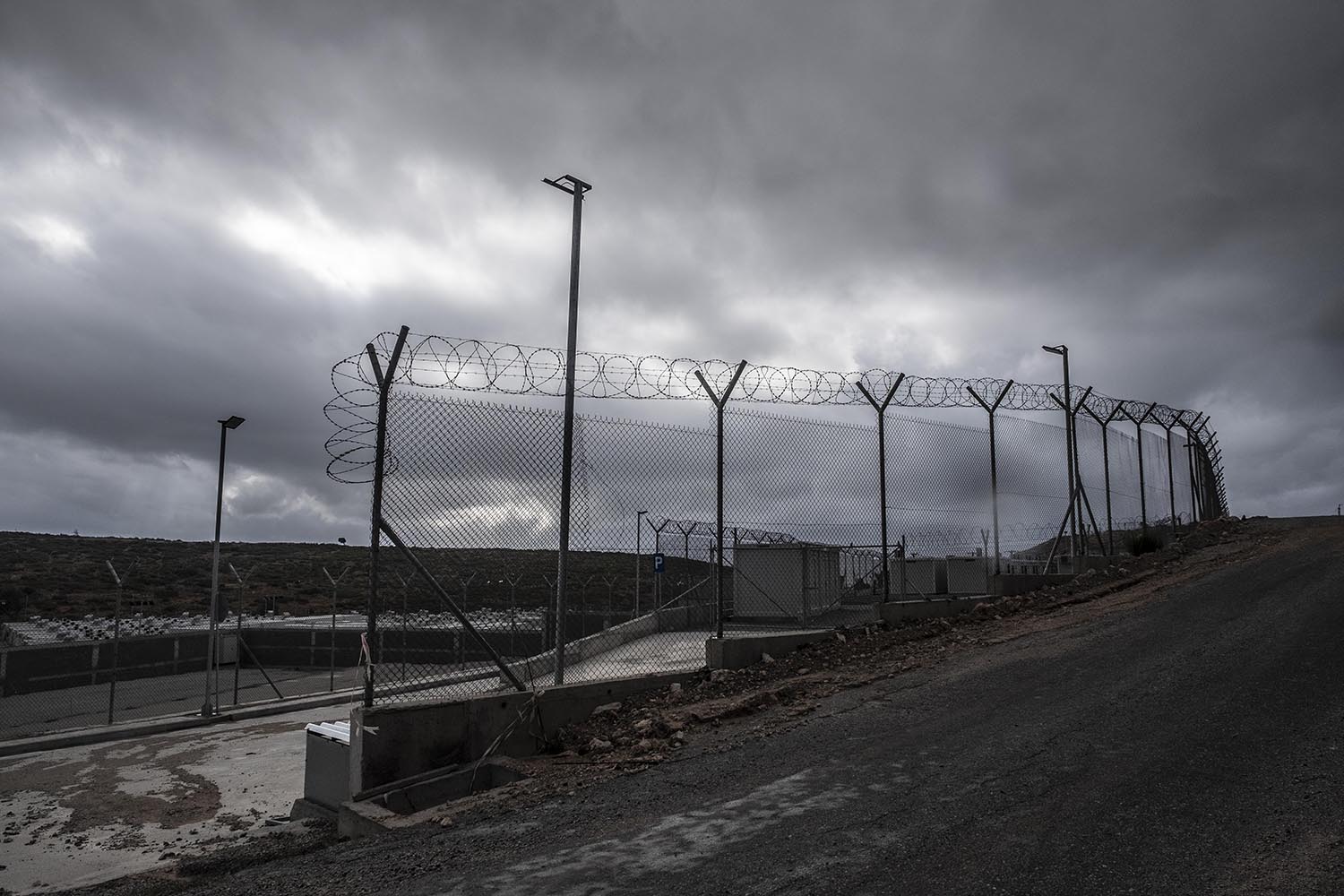 Local residents and their councils insist that Athens must get the refugees off the islands. The Greek government are dragging their feet and the state is handling the refugees with increased violence. The plan to “contain” them on the islands, which is in line with the new immigration plan unveiled by the European Commission last month, rests on a premise which has been proven to be wrong: the worse we treat them in Europe, the fewer will want to come. That assumption fails to take into consideration that migration flows are triggered by war, persecution and sheer poverty in Syria, Afghanistan, Mali and the Congo, and migrants are not put off by Europe’s poor welcome.

Neither the refugees nor the local population want a new detention centre, even if the prefab trailers are more comfortable than the shanties where they are living today. Ahmad Ibrahim, a young Palestinian who used to live on a Syrian refugee camp and arrived in Samos one year ago complains that “this is a prison. We came looking for freedom and now they want to jail us”. Abdul Hussain, a barber from Damascus, claims that he would rather be sent back to Syria: “it might be better to be at home and at war than to stay for ever in this place”. This is exactly what the new policy promoted by Athens and Brussels aims to achieve: for people fleeing war and poverty to stop seeing Europe as a safe place where they can start a new life.

The new detention centre is only a few miles from the town where Phytagoras was born. The place relies on tourists for a living and the locals distrust refugees. “We still don’t know whether it will be an open or a closed centre but, anyway, it is so far that I’m pretty sure we won’t see many of them around”, says Alex Tambakologos, an employee at a local car rental place. The young man suggests that the refugees should be sent to uninhabited islands “where they can live with dignity”. Before the new facility was built, local residents demonstrated against the plan, here and in the neighbouring town of Mitilene. Local political leaders have complained about the cost of the project and that the works have been contracted out to companies that are “friendly” to New Democracy, the Greek conservative party currently in office. 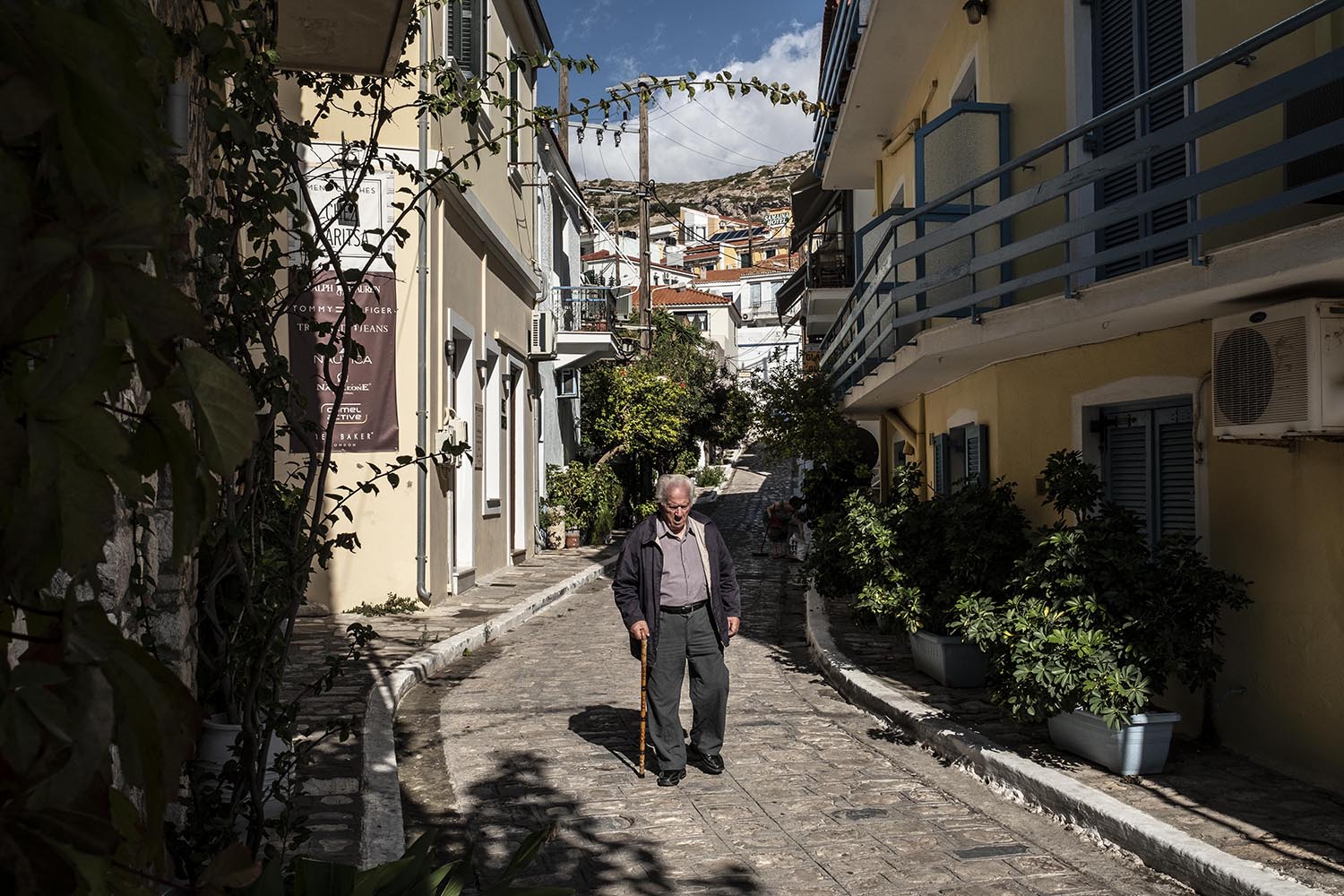 Before the new facility was built, local residents protested against the project.

Zoe Byrgote, a retired council worker, complains that “the situation on the island is very complex because the refugees are all over the place: they break into homes and destroy churches”. She buys into the conspiracy theories that claim that someone behind the scenes is paving the way for a Muslim invasion of Europe. She states that she doesn’t mind the new centre “so long as they are kept inside until they are transferred to another country”. She no longer expects any kind of solidarity from Greece’s EU partners because “in Europe all countries look out for themselves and nobody cares about the refugees”.

The squalor in which the refugees live in the overflowing official camps, like the one on Samos (and before that in Mória, on Lesbos) has forced NGOs to take action in order to attend to their most basic needs, something which the authorities have tolerated because, at the end of the day, it would solve problems. But now the Greek government, like their Italian counterpart did with the humanitarian rescue boats operating in the central Mediterranean Sea, such as those chartered by Open Arms, are increasingly making things more difficult for volunteers.

Neither the large international humanitarian organisations nor the local NGOs know if they will be allowed to keep working in the new camp because Athens has brought in a convoluted registration process without which they will be denied access to the new facilities. In an open letter, 68 organisations denounced that the conditions in the internment centres “may constitute an affront to human dignity”. Médecins Sans Frontières have openly stated that “refugees in Greece are discriminated against, but what’s in store for them is even worse: it is full-on segregation”. 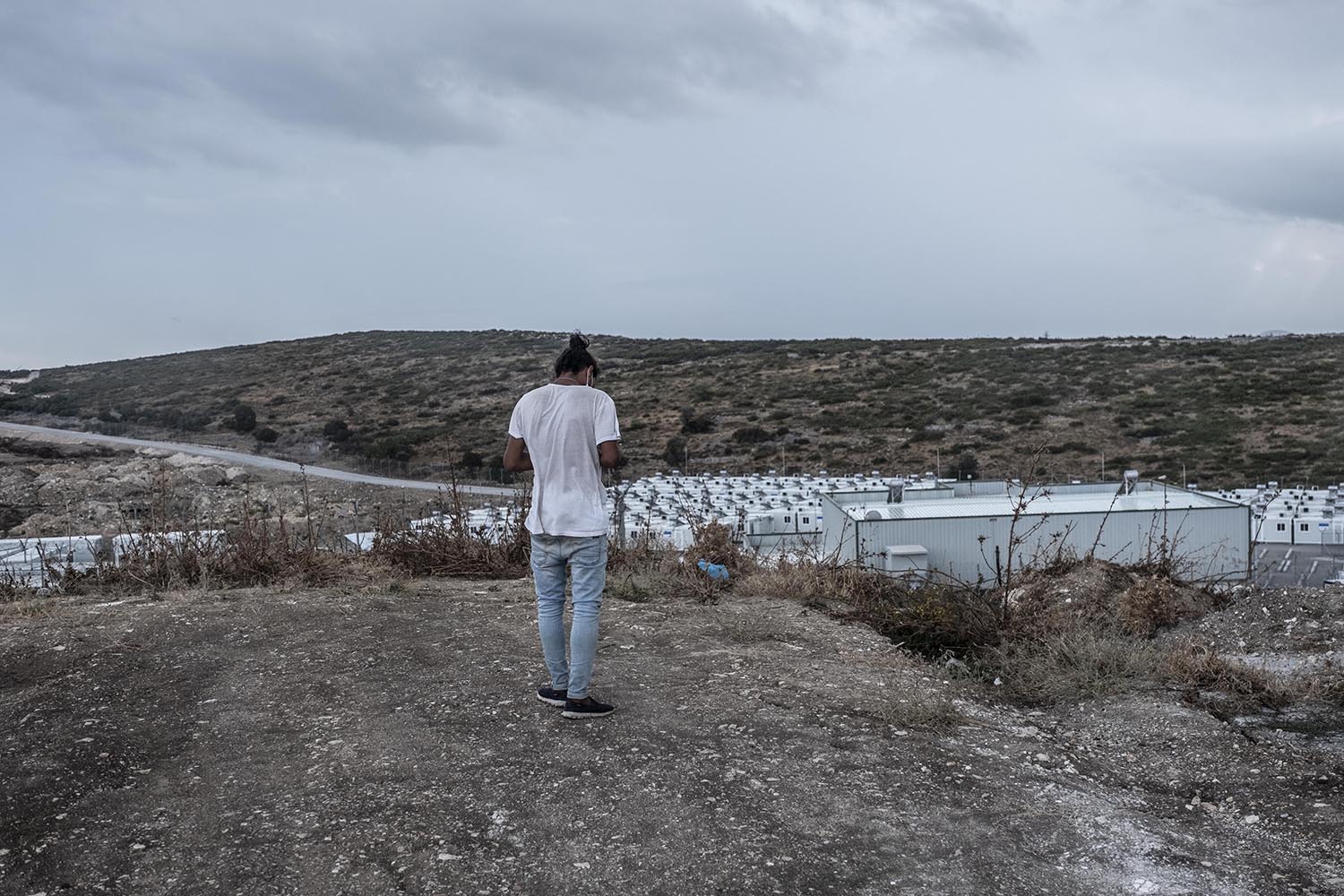